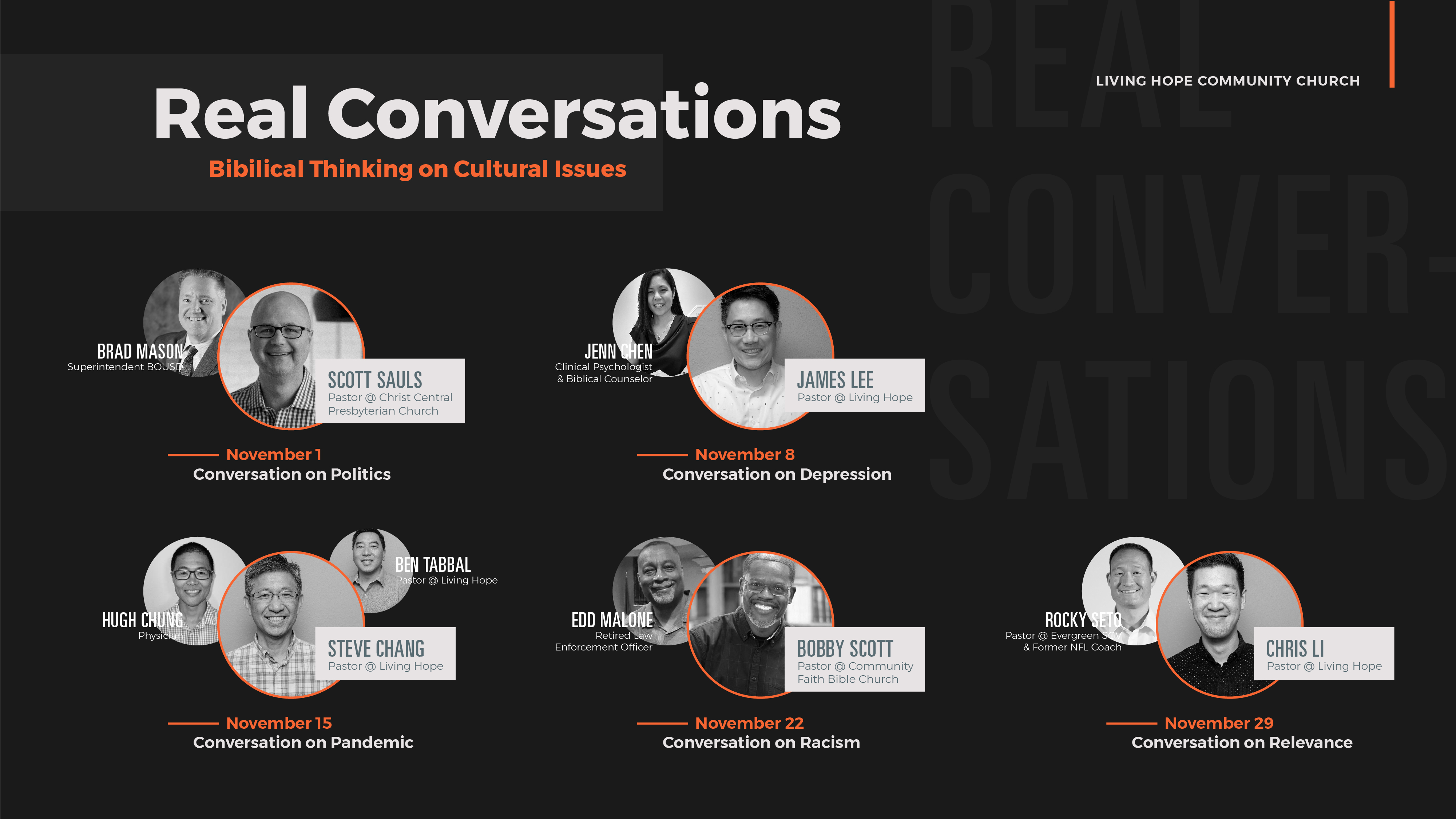 The church will think more biblically about some of the more painful, controversial, and divisive topics of life through biblical teaching and life talks. Real Conversations will be a 5-part series during the month of November and we invite you to be a part of the journey. 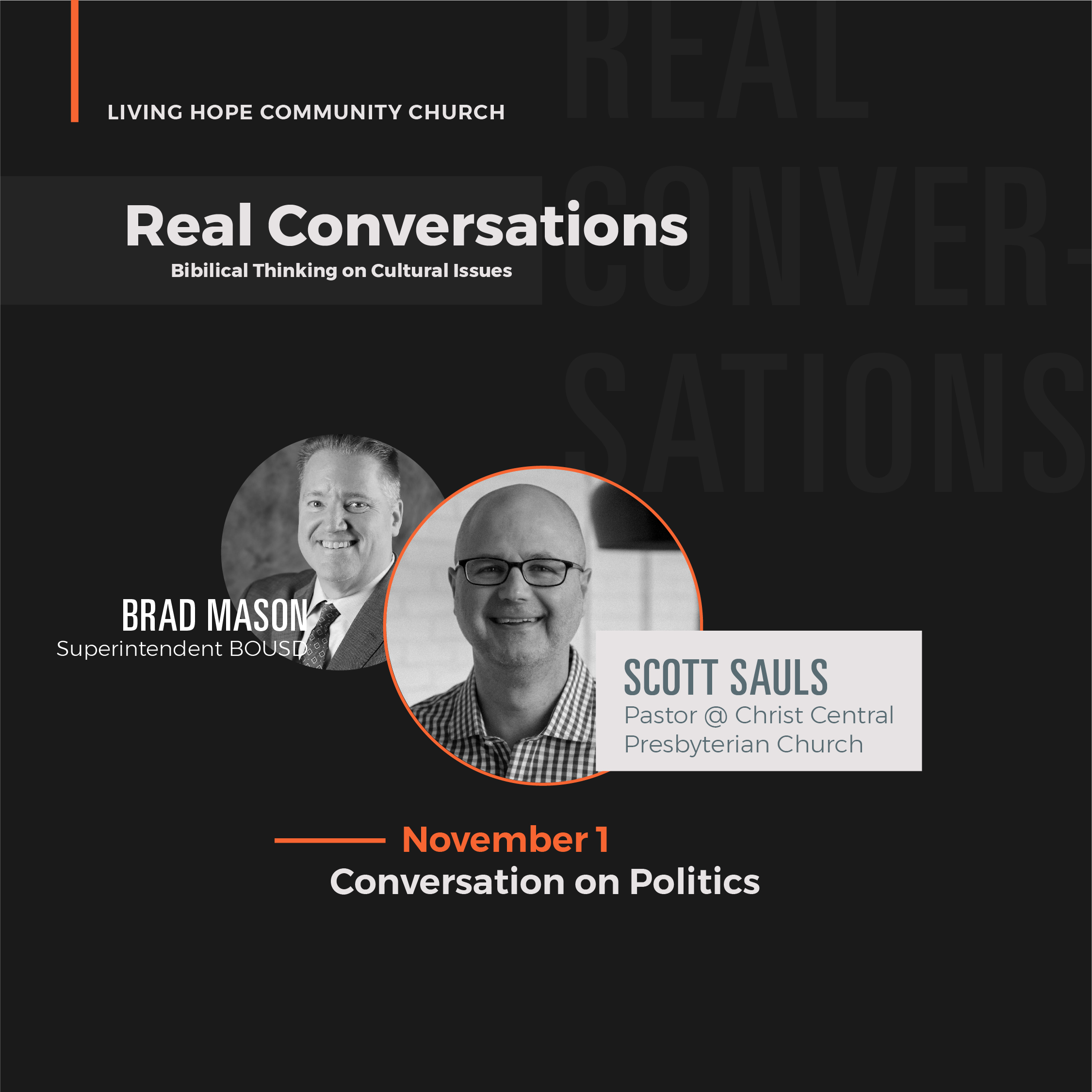 Scott Sauls serves as senior pastor of Christ Presbyterian Church, a multi-site church in Nashville, Tennessee (christpres.org) and is husband to Patti and dad to Abby and Ellie. Prior to Nashville, Scott was a lead and preaching pastor at New York City’s Redeemer Presbyterian Church, planted churches in Kansas City and St. Louis, and taught homiletics at Covenant Theological Seminary. Scott writes weekly at scottsauls.com, can be found on Facebook or Twitter/Instagram as @scottsauls, and has published five books: Jesus Outside the Lines, Befriend, From Weakness to Strength, Irresistible Faith, and his latest, A Gentle Answer: Our ‘Secret Weapon’ in an Age of Us-Against-Them.

I have been happily married to my high school sweetheart, Catrina, for 31 years. I am the proud father of two married children and the ecstatic Granddaddy of Dawson (15 months) and Addison who turns 1-year old on November 22.

The joy and the challenge of my three decades of service in education has always been addressing the question, “How do I leverage the roles, responsibilities, relationships and resources with which I have been entrusted to meet the needs of those I have been called to serve. Many times I am dealing with people who have diametrically opposed opinions and I am asked to lead and guide through situations that appear to have no simple answers. Much like our current political season, issues can become polarized but in good times and hard times we are always called to love and serve people, so that is what I always attempt to do. 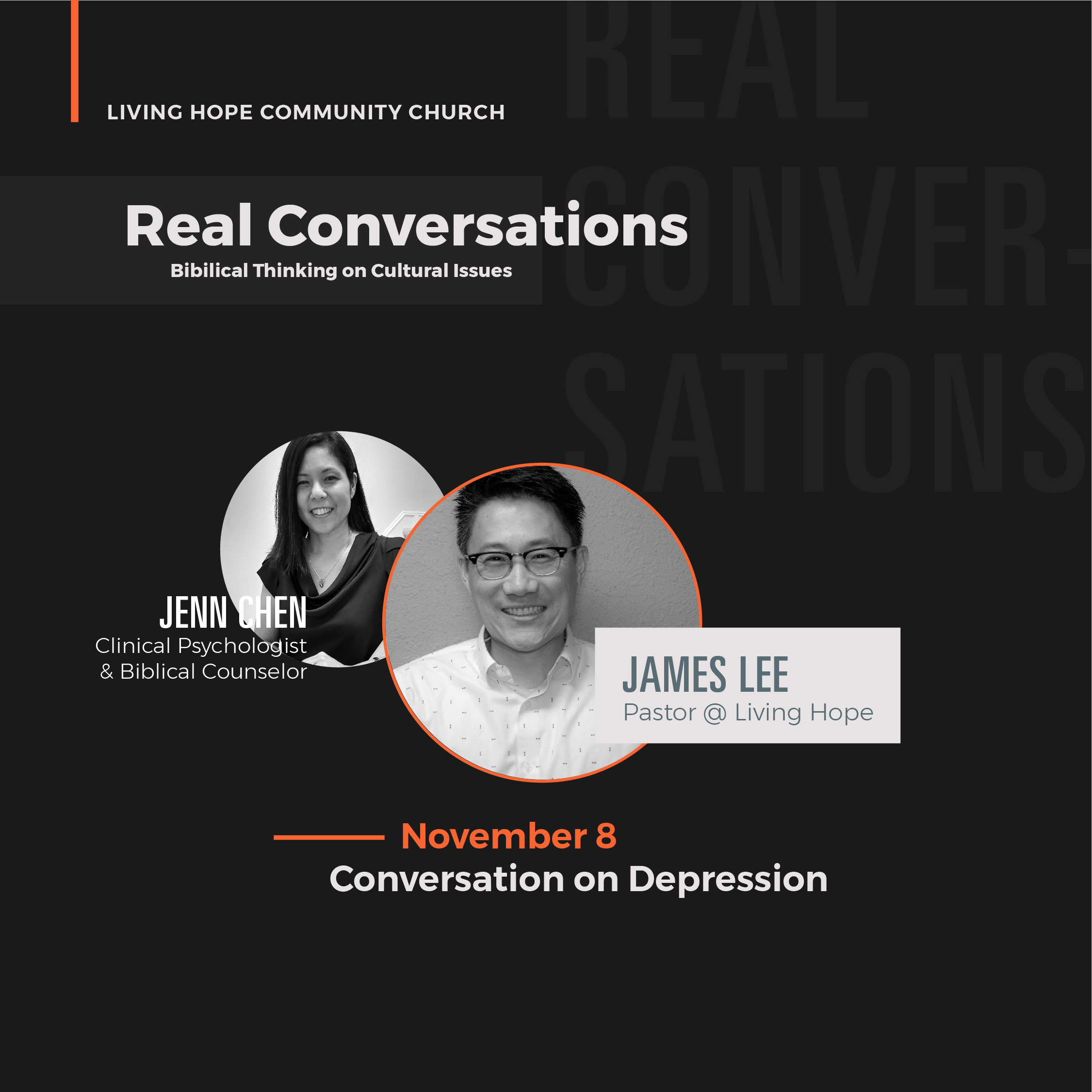 James is a graduate of USC and Fuller Theological Seminary. He is passionate about building up the local church to love its own and its neighbors. He and his wife Hannah love serving together with their daughter Abigail. Their dream is to go on a short-term family mission trip soon.

Jenn Chen is married to her best friend Peter. They with their teenage son attend Lighthouse Community Church, where she serves as a biblical counselor. Previously trained as a clinical psychologist and marriage and family therapist, Jenn graduated with her Master's in Biblical Counseling in 2018, and has served as an adjunct professor of biblical counseling. Jenn is grateful for how biblical counseling has changed her life and her counsel. She enjoys spending time with family and friends, enjoying God's creation, musical worship, reading and deep conversations, and baking. 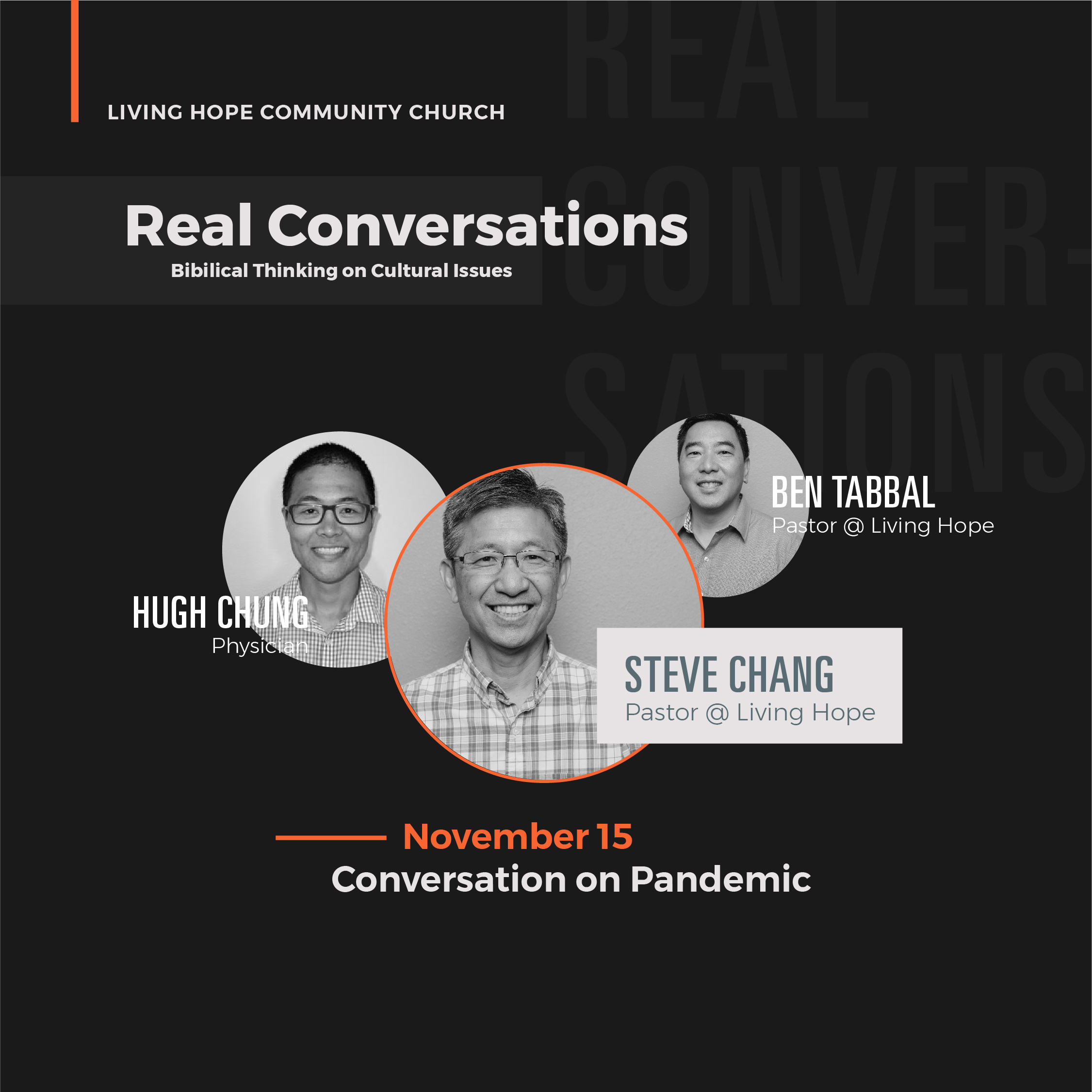 He is a graduate of UCLA (B.S. in Computer Engineering), Dallas Theological Seminary (Th.M) and Talbot School of Theology (D.Min.). He is on the council of SOLA Network and has a passion for influencing the emerging generation of leaders with the gospel of Jesus Christ. He is blessed to married to Hannah and to be a father to two adult children, Christine and Janice.

A native of Colorado until his college years, Hugh is a physician specializing in General Surgery, with additional sub-specialization in Critical Care and Trauma Surgery. He completed his undergraduate education at the University of Michigan (GO BLUE) and remained in the Midwest to obtain his Public Health and Medical Degrees at The University of Michigan and The University of Illinois in Chicago. Hugh then went on to complete his residency out in Michigan and became a somewhat recent SoCal transplant, moving out to Orange County in 2015 to complete his fellowship training.

After taking his first job out in beautiful Monterey County, he moved back down south in 2017 where he currently resides and practices at multiple hospitals, focusing on high acuity illness and injury, covering communities of South Central LA and East LA County.
Hugh joined Living Hope as part of his transition back to Southern Cal, and when he is not working, has many personal hobbies, but you will likely find him out on various cycling routes both paved and unpaved, as well as occasionally running on the same paths. He attends Living Hope with his wife Minae. During any extended free time, they enjoy the outdoors, including camping, hiking and dog agility sports. Hugh also has particular ministry interests in social justice and missions. 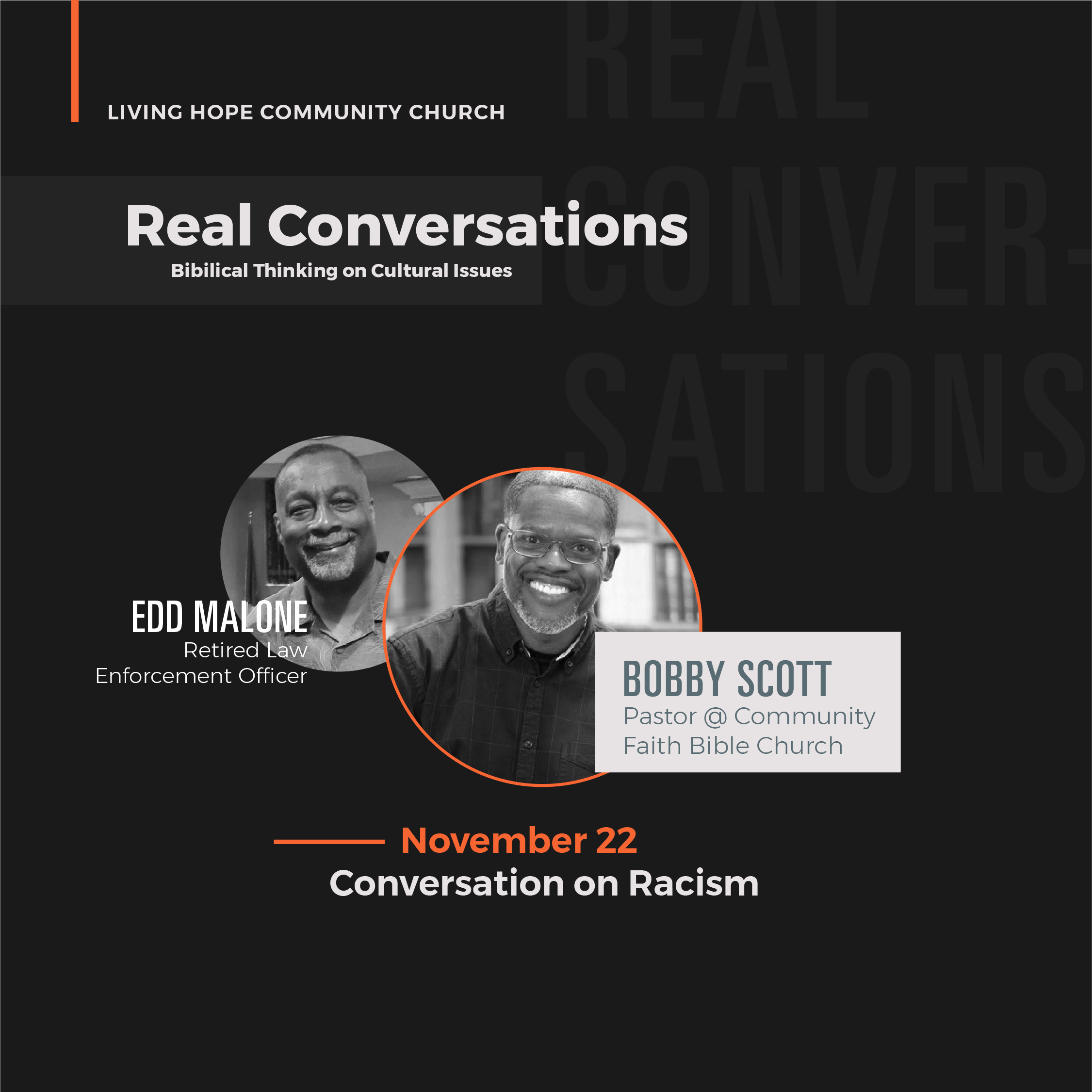 Bobby Scott is the Pastor of Discipleship at Community of Faith Bible Church in South Gate. He loves teaching the Word of God and through the power of the Holy Spirit watching God’s Word transform lives (2 Cor 3:18). Pastor Bobby is passionate about strengthening the urban church. He has pastored for over twenty-five years and enjoys writing. You can follow Pastor Bobby on Twitter @pastorbscott. Pastor Bobby married up when God blessed him with his wife, Naomi. He loves his six kids (ages 15-24). As a UCLA alumnus, his two favorite two teams are UCLA and whoever is playing SC. Go Bruins!!!

Edd Malone and his wife Sylvia who he met 40 years ago while on patrol, reside in the Inland Empire. They are members of Mount Zion Church of Ontario. Edd and his wife were members of Community of Faith Bible Church before their move to the IE. He has a passion for working with men and encouraging them to be "real" men of God and to be willing to stand for Christ (Ezek. 22:30). Edd is a retired law enforcement manager who spent time in uniform and as a criminal investigator. He is graduate of the Los Angeles County Sheriff's Academy and has a BS in Public Administration. Edd and Sylvia have six grand-kids (2 yrs old up to 12 yrs old) who they adore which came from three of their four adult children. 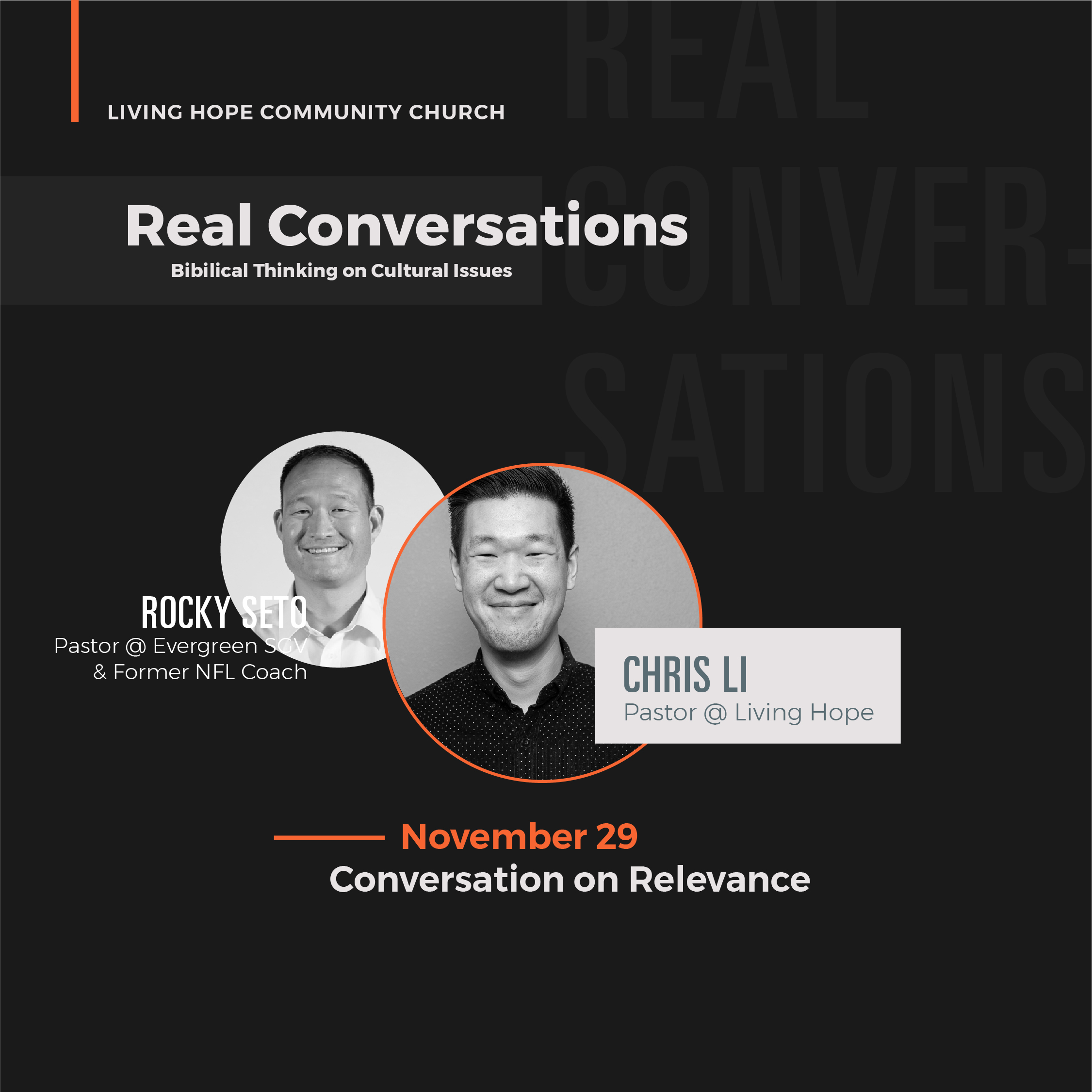 He grew up in a Chinese-American church near Torrance and is a graduate of UCR and Talbot School of Theology. Chris has a passion for making disciples and bringing the gospel to places where it has not yet been proclaimed. As the Director of Student Ministries, he shepherds the youth to be disciple makers of Jesus. He enjoys reading, sports (volleyball and basketball), coffee and movies. Chris married Jessica in October of 2016.

I am a son of “Issei” (first generation Japanese American) Parents. I grew up in a gardening family. My father, Akira Seto, taught me to work hard. My mother, Emiko Seto, taught me to be mentally tough. They are the greatest influences in my life. My brothers and I were raised in the San Gabriel Valley.

Sharla, the love of my life, and I celebrated our 14-year anniversary last July. Sharla, the athlete of the family, played soccer for the University of Southern California. She also became a Christian at the University of Southern California. The Lord has blessed us with 4 children. We have 2 older daughters named Kaylani and Mia. We have 2 younger sons named Troy and Timothy. We joined the Evergreen SGV Family in 2000 along with our former church, Pacific Heritage Church led by Pastor Mike Olsen. We were called to Seattle in 2010 and joined Cornerstone Christian Fellowship led by Pastor Joe Yoshihara.
After serving as a football coach for the past 18 years, the Lord has called us into full-time pastoral ministry to serve at Evergreen SGV.